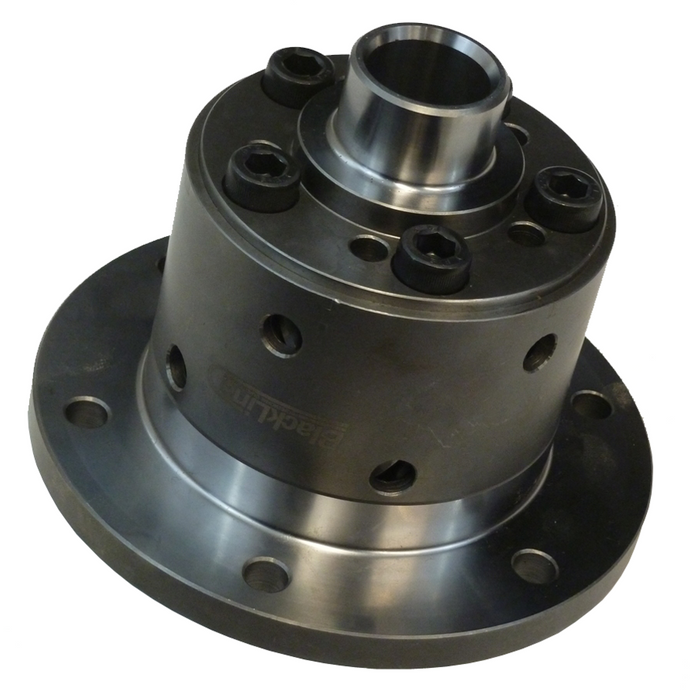 Blackline Helical LSD's - How They Work

The Blackline helical LSD's are torque biasing, that is they distribute torque between the wheels, loading more torque towards the wheel with the best traction thus improving performance and driveabitily. Especially in low grip situations.
The helical gearing manages the distribution of friction within the LSD. When torque is applied to the helical gear system it creates force that pushes the gear into the differential body, thus creating friction. Increases of torque, increases the thrust force directly proprotional to the amount of torque. This allows the Blackline LSD to cope with considerable traction imbalance even under heavy power conditions, as would be the case on exiting a powered up corner. But at low torque conditions the LSD can differentiate quietly and smoothly, thus making the differential very suitable for normal road driving. The Blackline LSD uses the popular parallel axis helical geared configuration optimised for even load distribution. They are designed with a torque bias of 5:1 this means that if  one wheel loses traction then the wheel with the most grip can receive five times as much torque as the wheel that is slipping. However, five times zero is still zero, so all these helical LSD's work best when both wheels are 'planted' and some traction is still available on the slipping wheel. In practice this is rarely a problem as there is always some 'drag' on the slipping wheel, however some drivers expertly use left foot braking to partially lock the spinning wheel.
Note - Helical LSD's work especially well when combined with modern anti-lock braking systems.